In Search Of Happiness - Scandimania

Bohr: Heisenberg, I have to say - if people are to be measured strictly in terms of observable quantities...
Heisenberg: Then we should need a strange new quantum ethics.
(Michael Frayn, Copenhagen)

Sunday was a day of Denmark, for good and bad reasons. Firstly, Copenhagen Zoo killed a baby giraffe that didn’t fit its gene pool, and secondly, Hugh Fearlessly-Eatsitall visited the country in the second of his Scandimania series. Bad timing for Hugh, since everyone was probably too outraged at what had gone on earlier in the day in the same city to really be prepared to give his show much truck. And this despite Hugh’s Copenhagen airport transfer being by very environmentally friendly bike.

As with the first part of the series in Sweden (ABBA, lakes, paternity leave, state-owned liquor stores, elk), Scandimania in Denmark seemed to be one piece of stereotypical trivia after another. Danish pastries are called “Vienna bread” (wienerbrød)  in Danish. And they taste better (funnily enough) when hand-made in a specialist Copenhagen bakery rather than when baked in your local Greggs. The Danish make architecture that reflects their mountain envy. The Danish make good murder shows. The Danish have wind farms. The Danish have a world-class foraging restaurant whose owner, surprise surprise, is a mate of Hugh’s. The Danish pay a lot of tax. Hugh only left out a big box of LEGO and a side of bacon. I picked up a copy of the Time Out guide to Copenhagen for 50p in a charity shop last week and I learned almost exactly the same facts from a quick skim through. Oh, and Hugh was even staying in the one hotel room the guidebook has a photo of. (Room 606 at the Radisson Blu (SAS) Royal Hotel, designed by Arne Jacobsen. Nice work if you can get it.)

Hugh’s main focus was on the Danish concept of hygge (a very home-based kind of cosiness that has no literal translation) and the question of why (when assessed using certain statistical criteria) the blonde, healthy Danes are rated by the United Nations as the happiest in the world. He concluded that their happiness was to do with their sense of community and notion of trust. That they can trust each other and, more importantly, trust their government to spend their astronomical taxes wisely and provide for their every need. Well, who wouldn’t want Birgitte Nyborg to be their Prime Minister? (...What do you mean, she’s not real?)

When I first visited Denmark at the age of 17, I too was struck by how much the state provided. The daughter of a family I was staying with was just starting at an efterskole (a one-year boarding school for 18 year olds where they can explore their interests, develop their potential and have their first taste of independent living) similar to the one Hugh visited on his programme, and she took us to see her new accommodation. I couldn’t believe the gorgeous ground-floor studio flat she showed us, complete with her own kitchenette and shower room, where she was going to live possibly for free, or at least for massively subsidised rent. This was long before universities in the UK started smartening up their hall of residence accommodation and providing en-suite bathrooms for the conference trade (and therewith sending rents sky high). Long corridors of small rooms invariably modelled on an urban myth of a Swedish prison, communal showers, no fridges or cooking facilities, and one pay phone for 300 people was the norm back then.

The concept of hygge seems to involve large family meals and roaring campfires, a similar party atmosphere to the one Hugh always tries to create at the picnics which are the prerequisite end to all his River Cottage programmes. In this version of Denmark, the sun always shines. Just like in Hugh’s Dorset, which currently probably only has its highest hillocks peeping out from the flood. 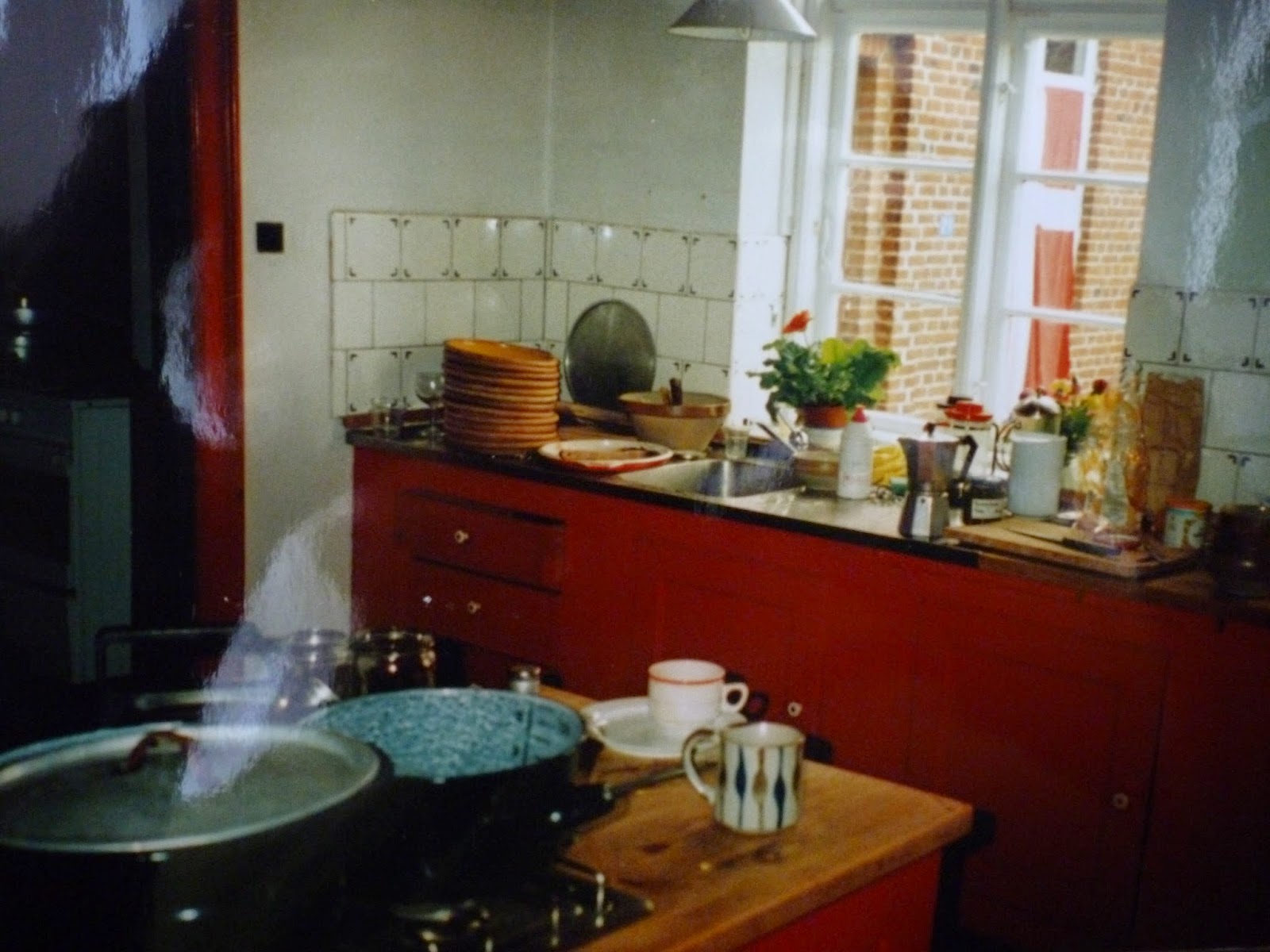 I have only visited Denmark in summer, so my memories of it are indeed of a very sunny place, of rolling tussocky sand dunes, marshy flatlands punctuated only by church spires and wind turbines, and big blue skies. But there were cold winds fuelling those turbines, so I don’t remember spending a whole bunch of time outside. Apart from on my most recent trip (ten years ago now), a crazy overnight visit to a midsummer party in the North Jutland near Nykøbing Mors, where being outside was compulsory. Having travelled far too light on my Ryanair flight to Aarhus, I sat and shivered next to the campfire where we were roasting our pølser (sausages), and had to borrow a jumper, and a pair of woolly socks to wear beneath my sandals. In those days, I belonged to the namby-pamby Londoners who never know cold. Thank goodness I now live up north in my own country, away from the sweat of the Smoke.

I have only been to Copenhagen once, for a couple of days when I was 17, and my memories of it are no longer that sharp. This is not helped by my only photos of the trip being taken on a bad quality instant camera of the pre-digital era. I was staying with some family friends of my then boyfriend, and the husband gave us a tour of the city which seemed to consist of routes bordering on trespass (“It is a little bit not allowed to drive through here”, as we entered the gates of the Carlsberg brewery) and illegal parking (on the Danish equivalent of a double yellow next to the shore overlooking the Little Mermaid). I ate a pølse from a Tulip snack caravan which is definitely well up there on the list of worst meals of my life and about as far removed from a dinner at Noma that you could possibly get. We went to Tivoli in the evening, where it poured with rain and my boyfriend couldn’t stop farting. Which was possibly linked to the sausages we’d eaten for lunch.

The Danish people I spent most time with lived in South Jutland near the German border, and seemed to have a dislike of Copenhageners (or at least of their accent), so it’s hard to know whether they or the people Hugh was talking to were the more typically Danish, or who these studies of happiness are meant to represent. The people I knew were lovely, gentle folk who could not have been more hospitable, and refused to get even a little bit cross when I managed to crash their car. Blonde? Yes, all of them. Healthy? There was a lot of smoking and beer-drinking going on, and they enjoyed using our customs allowance on runs over the border into Germany to stock up on cheap booze (our reward being a visit to the incredible Nolde museum at Seebull). But their home-cooking (often with produce from the garden) was superb. Happy? Yes, probably. “Content in a very earnest way” is maybe a better way to describe it.

The Danish always struck me as a nation very proud of themselves, but it was a gentle pride that you wanted to share. (Though maybe not some of the older generation's attitudes towards immigrants.) They exhibit a true contentment with themselves and who they are. The Danes have a deep love for their flag, which flutters high in everyone’s gardens, and somehow its red and white colours all their buildings and scenery. But the flag always manages to avoid the imperial or militaristic connotations of a Union Jack or Star-Spangled Banner.

Having visited the city separately and become addicted to The Bridge and The Killing, my husband and I have a current yearning to return to Copenhagen. It seems odd that series about serial killers should have that effect on us. But hyggelig and happy are certainly two things that we strive to be, and my Time Out guide ensures me of the city’s family friendliness (despite our daughter being just a bit too young to be bribed by the promise of the biggest Lego shop in the world). Conveniently, SAS is about to launch direct flights from Leeds Bradford, our nearest airport. But after the sad fate of Marius the giraffe this past weekend, I think we’ll have to give the zoo a miss.

Posted by Rebecca Dodgson at 06:59

Rebecca Dodgson
I started writing my first blog ten years ago. I didn't really know what I was doing or expect anyone to read it, but my mum had just died of cancer, and I found writing helped me begin to deal with this devastating loss. As the blog was called "CrouchEnding" after the London suburb we lived in, it seemed necessary to end it when we moved to York a few years later. After we had our daughter, I was then challenged to write a new blog as part of 40 (small) personal challenges I undertook in the year I turned 40. And the blogging was the challenge I enjoyed the most. So when the 40 challenges were completed and my young daughter finally got her 15 hours of nursery funding, I looked for something else to write about. Telly and Travels is it. Something I do too much of combined with something I would like to do more of.